In this post, I want to document the consistency with which Catholicism is associated with leftism in the modern world and the leftist influence that Catholics have exerted on the United States.

To begin with, internationally we see that the more catholic a nation is the more likely its population is to endorse left wing social views:

Previously, I found a pretty strong positive correlation between the proportion of a European nation that is protestant and it’s score on measures of economic freedom. So more Catholic nations are surely to the left of less Catholic ones.

In Britain, Catholics are far more likely than average to vote Labor:

There are reports saying that this is no longer true, but I haven’t seen any national polling of Catholics to validate this. It is noteworthy that the current left wing leader of Canada,  Justin Trudeau, is a Catholic.

I’m not aware of any data on voting in Australia, but opinion polling shows that Catholics are socially to the left of other Christians there:

“The poll, commissioned by the “Equality” campaign, found that 66 percent of Australians support legalization overall, including 58 percent of people of faith. That number, however, rises to two-thirds of Catholics in support of same-sex marriage.

Strikingly, Catholic support was roughly the same as among followers of non-Christian religions, and higher than other Christian groups such as Anglicans, the Uniting Church and the Church of England. However, it’s not entirely clear how wide the gap actually was since the poll comes with an eight percent margin of error within each specific category.

The overall results echoed a survey by the firm of Crosby/Textor in 2014, which also found two thirds of Catholics backed same-sex marriage, and put the overall level of support at 72 percent.” – White (2017)

In Brazil, protestants seem to be to the right of Catholics. This is noteworthy in part because Brazil is a majority Catholic nation. This, in conjunction with the national comparisons noted earlier, make it unlikely that Catholic leftism is explained by Catholics being a minority in some nations.

“Evangelical Christians – who make up 29% of all Brazilians – were one of the groups who supported Mr Bolsonaro in greatest numbers. According to the last pre-election Datafolha poll, 61% of evangelicals were planning cast their votes for him.” – (Watson, 2018)

In America, the majority of whites from non-protestant nations lean democrat and there is a strong positive correlation between how republican a white ethnic group is and the prevalence of Protestantism in the nation they descend from.

Even among Asian Americans, protestants heavily lean republican while Catholics are nearly evenly split between identifying as republican and democrat.

The same pattern held in the 1960s, though Catholic bias was more extreme in the 1960 election.

Consistent with this data, Marlin (2010) reports the following:

The 1960 election was thus a point at which WASPs lost significant control of the US political system. Their will no longer determined national elections.

Anyway, turning to specific policies, Catholic Americans have long been to the left of protestants on sexual morality. 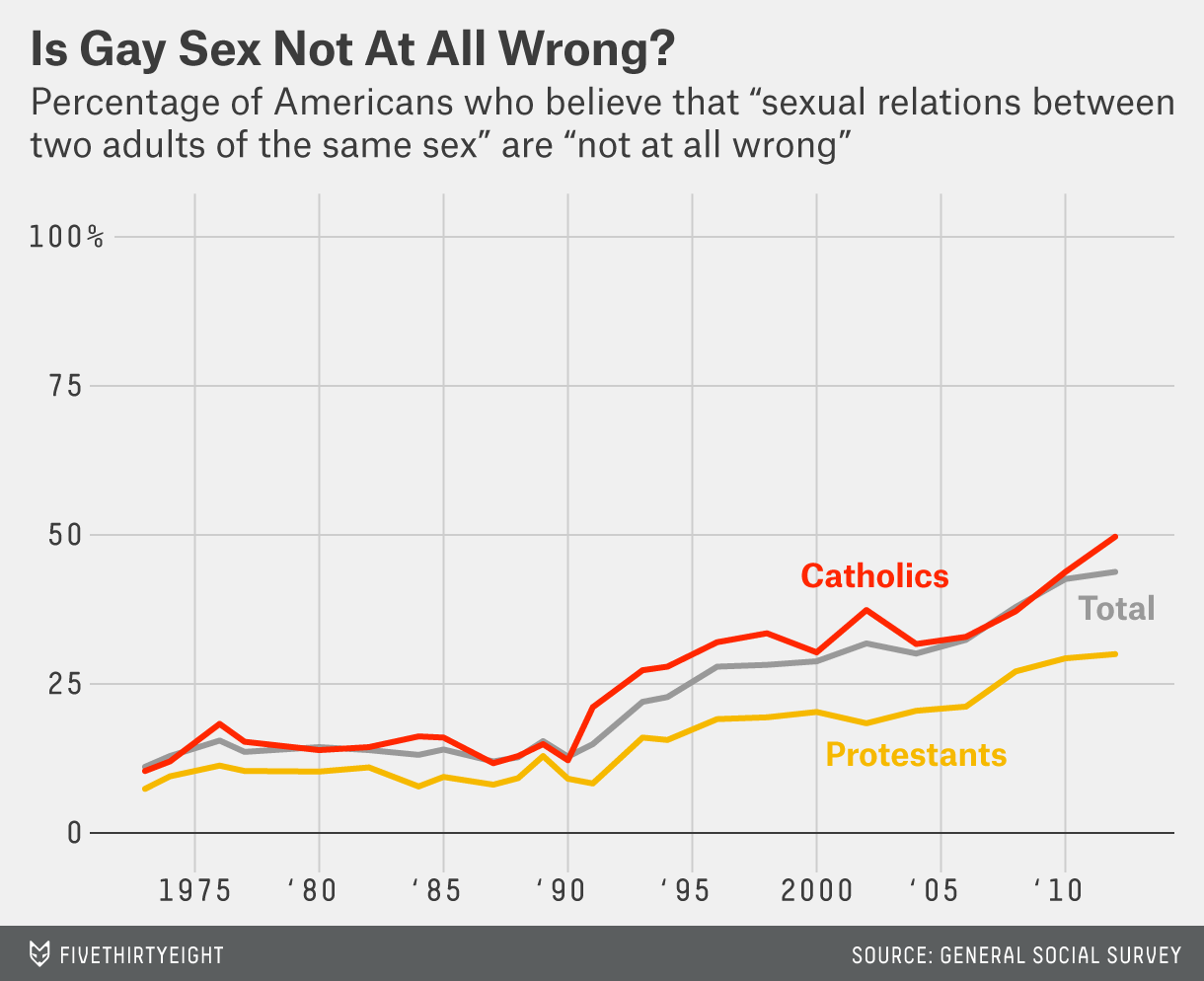 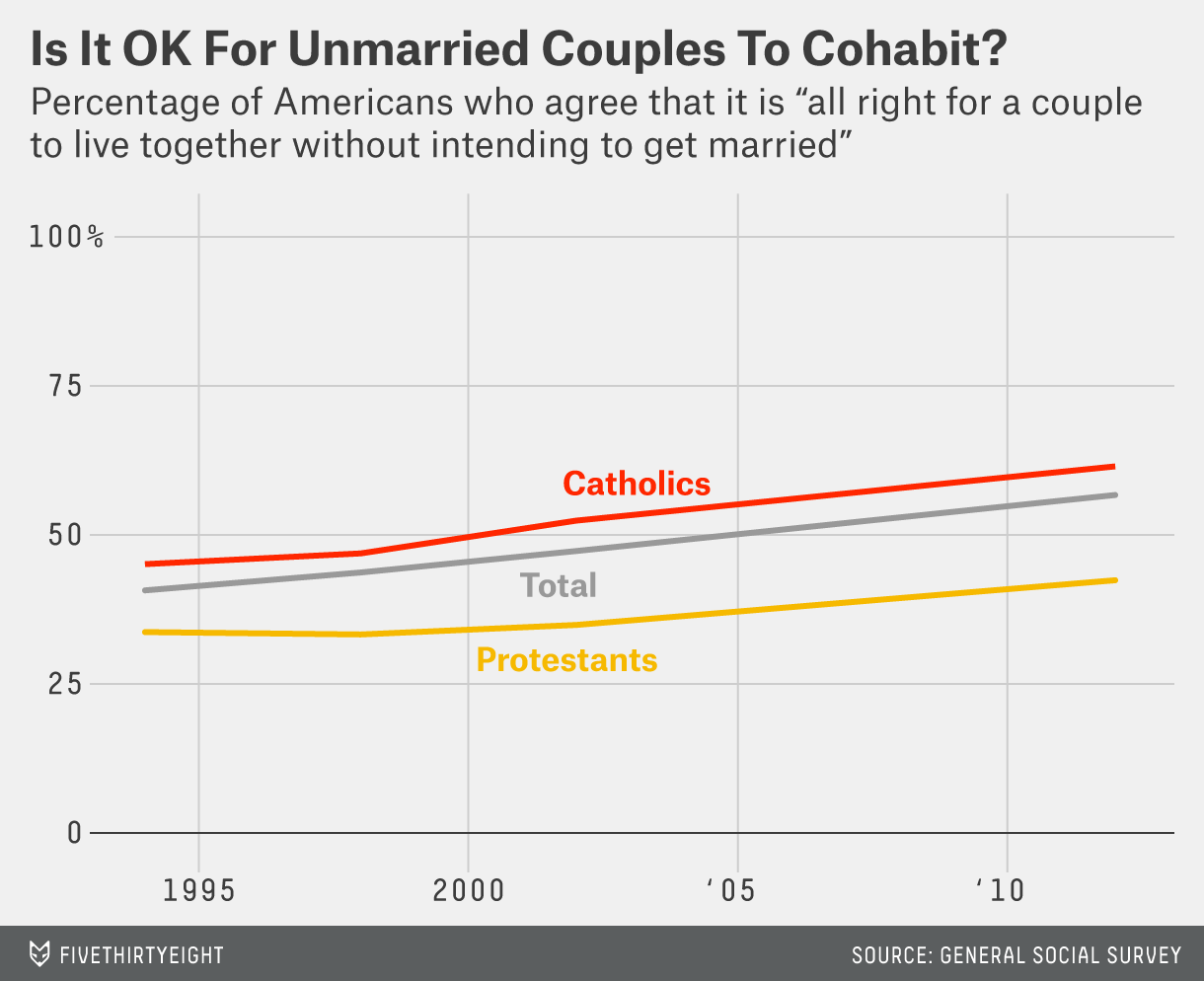 Analyzing data from the General Social Survey, and restricting the analysis to non-Hispanic Whites, I found the same was true with respect to abortion and welfare spending. (Obviously, these differences are not huge and the point is not that Catholics are left wing in absolute terms but, rather, that they are left wing on these issues relative to protestants).

So, Catholic voters are to the left of protestant voters, and that has had a real effect on American elections.

Turning to the elite, in 1969,the Carnegie Commission on Higher Education issued a survey filled out by 60,000 American university faculty members. This survey is reported on in Lipset and Ladd (1971). As can be seen, Catholic (and, to a greater degree, Jewish) academics were to the left of protestant academics.

This data implies the following representation of Catholics, Jews, and Protestants, among academics of each political orientation:

Then again, this pales in comparison to the absurdity of the demographics of the American Supreme Court, a group which includes not a single person born to a protestant family.

And various empirical studies have shown that Catholic judges (and Jewish judges) rule to the left of protestant ones (Bornstein and Miller, 2007).

In conclusion, Catholics exert a left wing influence both internationally and in the United States. In America, Catholics push the elite to the left, though not to the degree that Jews do. Among the mass public, Catholics, unlike Jews, are able to exert an election determining influence by voting.

Of course, some WASPs have exerted a left wing influence too, and some Catholics have been right wing. But their net influences as groups are clear. When WASPs of the early 20th century said that Catholic and Jewish immigrants would fundamentally change the nation’s political identity they were entirely correct.

In this post, I’m not going to attempt an explanation for Catholic leftism. I might do that in a future post, but the purpose of this article is just to document that Catholic leftism is a real fact of reality.

5 thoughts on “The Leftist Influence of Catholicism”