Some people think that history, or at least history since the enlightenment, can be characterized as a process of consistent long run improvement even if there have been occasional bumps on the road. This is sometimes called a Whig view of history and is probably most famously championed today by Steven Pinker.

Pinker and people like him often point to massive improvements in economic and technological conditions to justify this view. They often share charts showing national trends like the following: 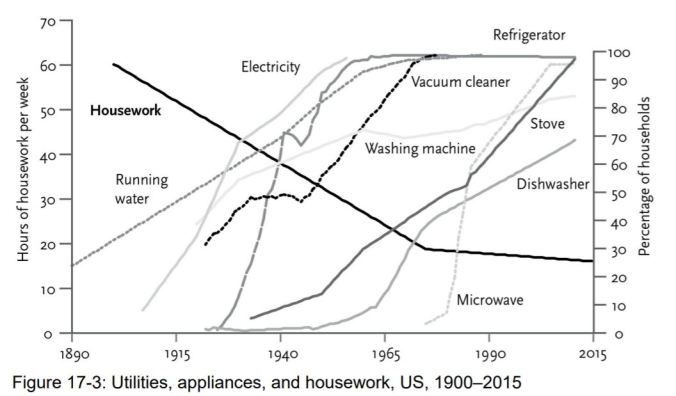 They also sometimes talk about how Western societies have greatly expanded the legal rights enjoyed by various minority groups and have adopted generally egalitarian social norms in a politically democratic context.

There are many problems with this narrative. The one I’m going to focus on in this post concerns psychological well being. Many of the proposed improvements of the last century or so, technology, wages, political rights, etc., don’t have much obvious value aside from their potential to improve people’s psychological well being. If the fact that we now have running water and electricity and computers and smart phones and the ability to participate in democratic elections in which nearly all adults can vote (etc) hasn’t made us any happier then it isn’t obvious that they are of much value.

If we do think that these things have increased our psychological well being, we might expect that Western countries would have generally seen positive trends in mental well being across the 20th century as all of them went through this process of progress.

My own view is that some of these things improved life but others have had a strong negative effect such that the net impact of “progress” has been somewhere between neutral and modestly negative on average though this has varied somewhat by country.  Moreover, the impact has not been equal across age groups. The impact on the lives of old people has been largely positive while the impact on younger people (e.g. under 45) has probably been largely negative.

To substantiate this conclusion, I’m going to review data on rates of suicide, depression, and general happiness, below. Some might argue that national trends in these metrics is a very crude way of assessing the impacts of a basket of different societal changes. This may be true, but assessing national trends in wellbeing is surely nonetheless adequate as a response to people pushing a pinker-esk view of history on the basis of national trends in other variables.

To be clear, I am not saying, as right wingers sometimes do, that we are living in an era of unprecedented mental suffering. That conclusion is simply not supported by the data.

Still, especially given the enormous effort which was put in to achieving this “progress”, and the opportunity cost of these endeavors, I think anything other than a clearly positive evaluation of progress’s impact on mental well-being justifies a good deal of skepticism towards the last century and the ideologies which centered political life around further this progress.

Moreover, because it seems implausible to suggest that thinks like running water and modern medicine haven’t had a significant positive impact on wellbeing, it seems likely that if progress as a whole has not had a significant positive impact then the basket of things which we call “progress” must contain elements which are at least as negative in their impact as, running water, and modern medicine, were positive in theirs. If true, it seems clearly important that we identify whatever these cancerous elements of ‘progress” are and begin the process of removing them. For these reasons, I think even a conclusion like “the net impact of progress has been neutral or slightly negative” has quite significant political implications.

With that said, let’s turn to the data.

Let’s begin with suicide rates. In the United States, suicide rates declined in the early 20th century, were fairly stable between the 1950s and 1980s, then fell to a low point in the late 1990s and have since risen back to levels not seen since the great depression. 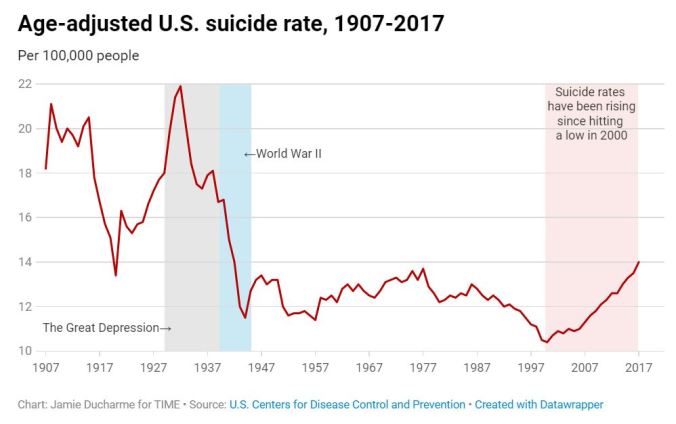 Using Google’s Public Data Explorer, we can see that, relative to 1960, suicide rates have fallen in Denmark, Sweden, Japan, Austria, New Zealand, Australia, and the UK, but have risen in Canada, and Ireland, and have been fairly stable in Norway, Finland, The Netherlands, Spain, France, Italy, Switzerland, and Iceland.

Breaking this data down by age reveals that the 20th century saw sharp declines in the suicide rates of old Americans, relative stability among the middle aged, and a nearly three factor increase in suicide rates among adolescents and young adults.

As we’ve seen, in the 21st century the overall suicide rate in the US has risen. This is in part because, unlike in the 20th century, suicide rates are now rising among all groups under the age of 75, not just young people.

We can combine data sets to the compare suicide rates be age that were present in 1900 to those in 2017. Unfortunately, the age groups used in modern suicide statistics are not the same as those used in the past, and the CDC seems to release these numbers segregated by sex now. Still, we can average across sexes for a rough estimate and some of the age groups have not been changed. Doing so, it appears as if the suicide rate of Americans under 50 is probably higher today than it was in 1900. For Americans under 44, this is clearly the case.

Turning away from America, between 1923 and 2001 a similar pattern played out in New Zealand. 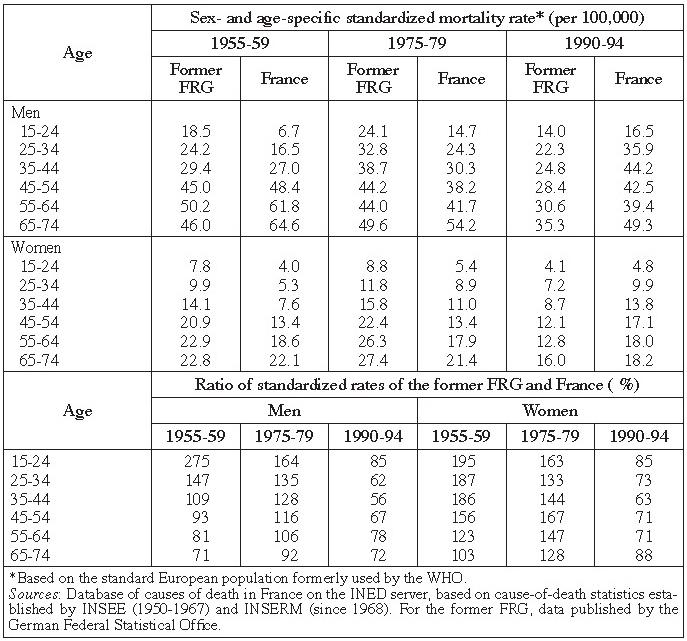 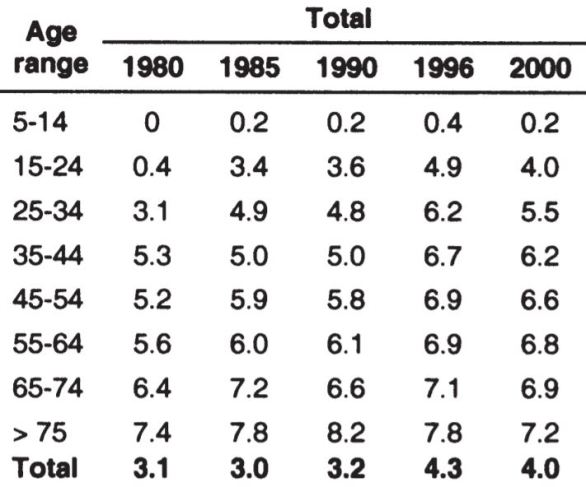 In England, sex segregated data suggests that the suicide rate of people under the age of 35 was roughly the same in 2007 and 1863 while suicide has fallen among people who are older.

Between 1964 and 2000, suicide rates for those under the age of 35 increased in Australia, but they have since fallen back to what they were in the 1960s.

Finally, between 1980 and 2009 suicide rates generally fell in Scandinavia, but this was either less true or untrue of young people depending on the country.

Thus, in the 20th century there was a good deal of diversity in national trends in suicide rates across western countries, but there’s more consistently been a lack of improvement in the suicide rates of young people.

Turning to self reported rates of depression, between 1905 and the late 80’s, the probability of an American experiencing depression at some point in life increased significantly for every age group. 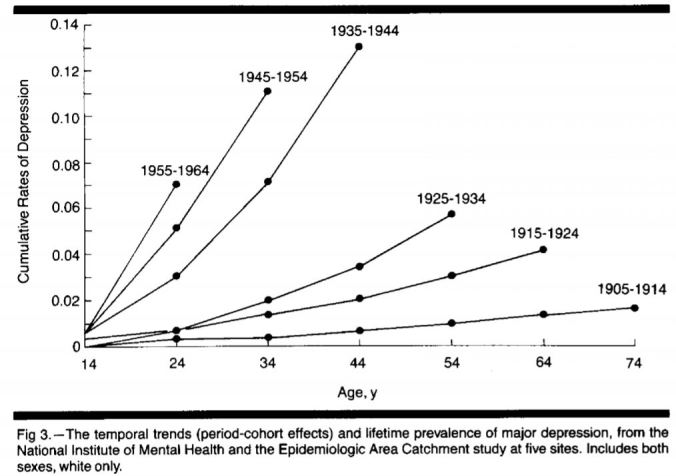 Research on more recent trends in depression among the general population is contradictory, with some data indicating that not much has changed and other sources suggesting that there’s been a rise in depression rates. 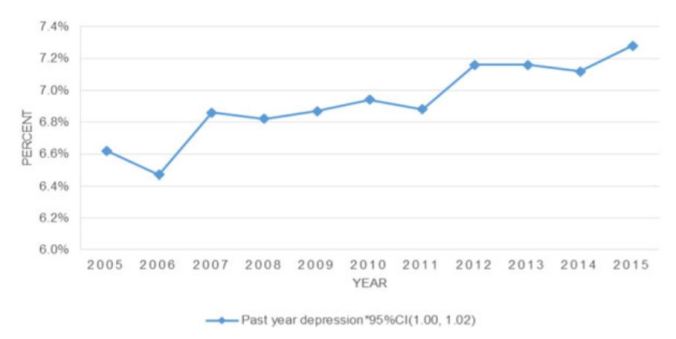 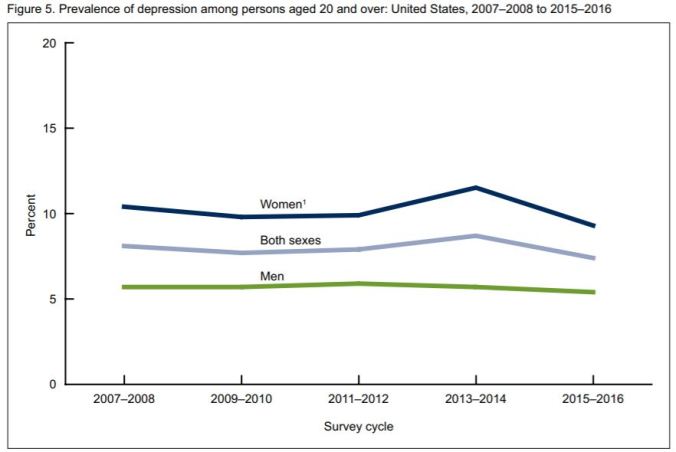 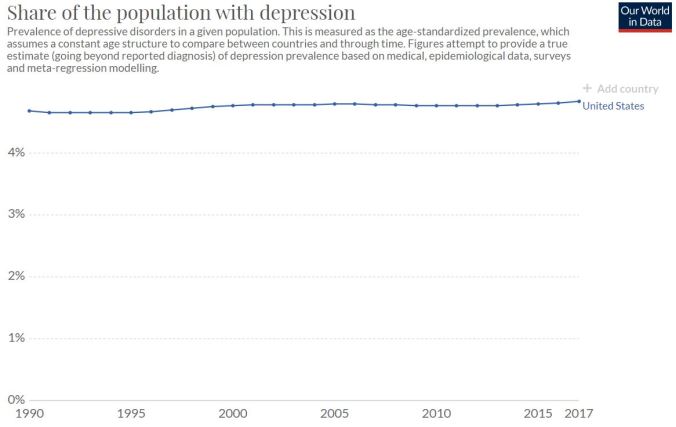 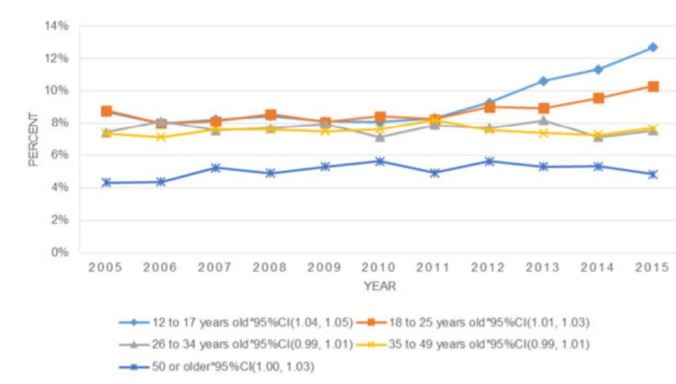 Even studies that don’t find an increase in the rate at which young people say they are depressed find increases in symptoms of depression like feeling overwhelmed, experiencing more negative emotions than usual, etc.

On such measures of depressive symptoms, the mean score of Americans in college and high-school increased by roughly 0.70 SD between 1932 and 2007, a very large change (Twenge et al., 2010)

In Germany and England, rates of depression have been stable for the last few decades.

However, mirroring what was seen in America, in England rates of depression among young people rose between 1986 and 2006.

In Norway, rates of depression increased dramatically between 1930 and 1991 and this was disproportionately due to a rise in depression among those under the age of 60. 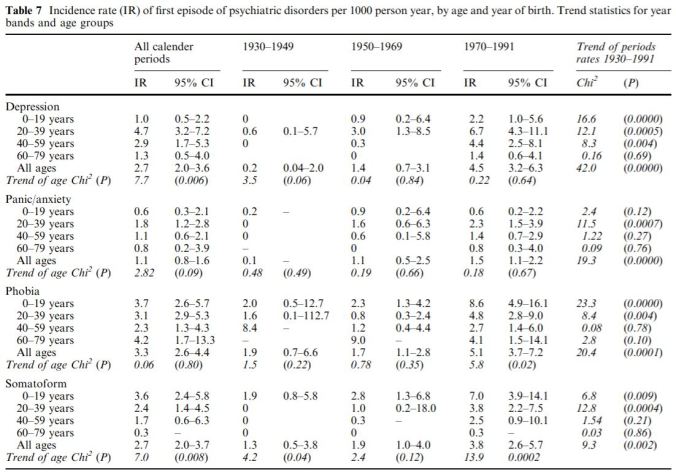 Depression rates in Finland have also been rising at least among the young. 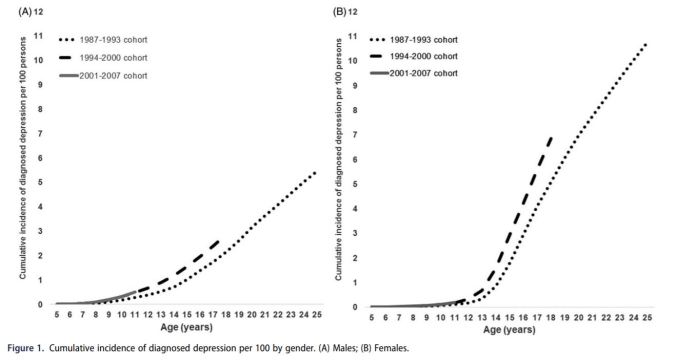 Contrary to these trends, a county-level study in Sweden found that depression rates slightly fell between 1947 and 1997 with this decrease occurring the least among those under the age of 40.

Thus, long term data in Norway, Denmark, Canada, and America suggest that depression rates have risen in these places. England and Germany have had stable overall depression rates while depression among the young rose. Sweden may have seen a decrease in depression but is based on data from a single county and even there this was least true of young people.

Self Reported Happiness and Life Satisfaction

Let’s now turn to surveys which ask people whether they are happy, or satisfied, with their lives. Such polling indicates that the number of people saying they are satisfied with their lives has increased in the EU from around 77% in the early 70s to around 81% today. While positive, this change is minor and the direction and size of change is very dependent upon the exact years chosen for the stop and end point. On the whole, it isn’t obvious that there has been any significant trend in the EU.

Of course, there is a diversity of trajectories contained within the EU. For instance, the proportion of people satisfied with their lives seems to have increased by about 8 points in the UK and Germany between 2000 and 2016. But even in the UK and Germany, there was no discernible trend between 1973 and 2000. 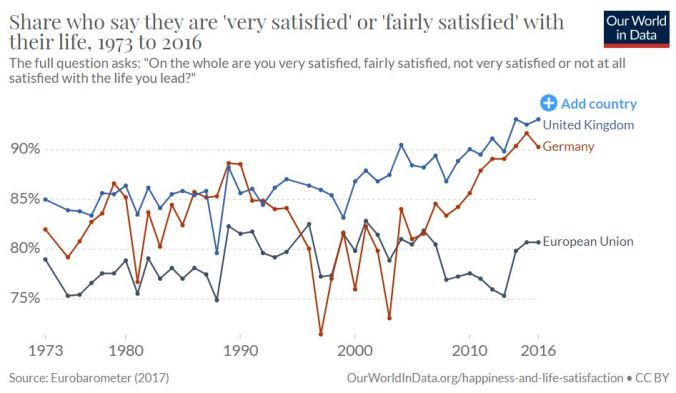 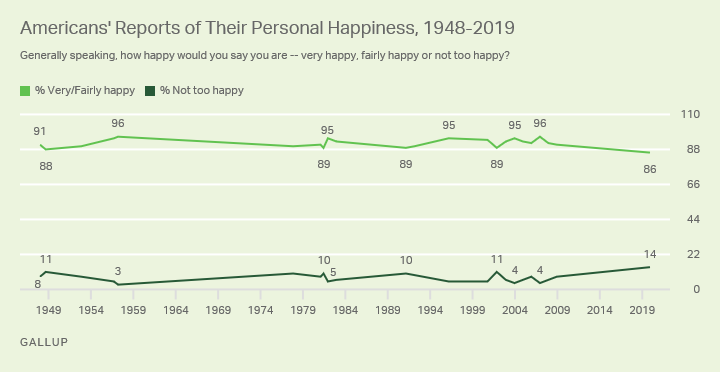 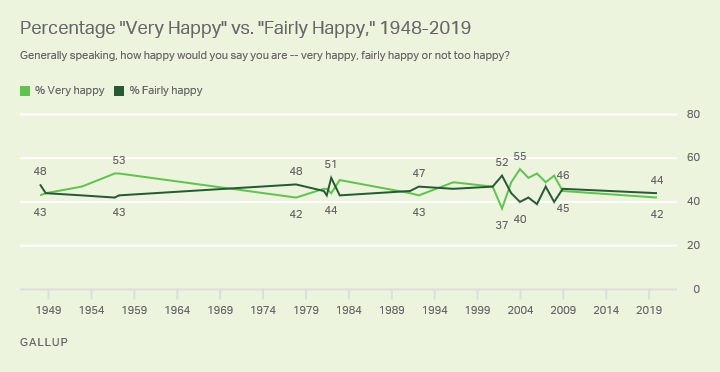 Among US high-school students, neither life satisfaction nor happiness significantly changed between 1976 and 2006.

Upon seeing this evidence, we might think that suicide and depression rates may measure the proportion of people past a certain threshold of negative feeling and that the variance in happiness might increase without the mean decreasing or even with the mean increasing and we’d still see an increase in depression and suicide rates. This explanation is not supported by the data. Over the last 50 years, the variance in happiness has decreased across the West (Ospina et al. 2017).

We might also worry that these sorts of self report measures might suffer from a “reference group effect”. That is, when people are asked how happy or depressed they are, or how often they feel a certain way, they may respond not with their absolute degree of happiness or depression in mind but, rather, according to their happiness/depression level relative to some reference group such as the society they live in, or the one they grew up in, or the people they personally know. If this is so, the mean degree of self reported happiness/depression won’t change much across time even if the absolute degree of happiness is changing quite a lot. This might explain the surprising degree of stability in self reported happiness across the decades. Or it might not. It seems less likely that this explains the trajectories seen in depression rates.

We may further worry that the rate of deaths by suicide will have decrease with time due to the increased speed of medical responses and our improved ability to keep people alive once they are in medical care and this could mask an increase in negative feeling that is taking place.

Other concerns could be generated. This data is far from perfect. But no source of data justifies the view that the progress of the last hundred years had a significant positive impact on psychological well being. And as I’ve already argued, I think this conclusion really does have some quite significant political implications. Drawing out those implications in detail requires a theory of why progress hasn’t improved mental well-being, an explanation which identifies what the hugely negative elements of progress have been. That is beyond the scope of this post, which merely sought to show that such an explanation is in fact needed.